Type: Cultural, Educational.
Service of transportation: passenger car, mini-bus, bus.
other services: Martvili canyons used to be a bath place for Dadiani family. Now people visit it to enjoy the scenery, its waterfalls and take a boat trip in the river with deep green color. New visitors Centre was built in Martvili in summer, 2016 and updated prices and conditions are as follows:
-Entrance 5 gel , boat trip 10 gel per person (prices updated for summer 2016) There are walking routes in the canyon (around 300-500m) and boat trip including stoppage time lasts around 15-20 minutes. Walking routes are must and not less impressive than boat trip.
-Work hours: from 10 am to 6pm; Everyday except Monday.

Early in the morning departure from Tbilisi to the west; Breakfast or picnic by Rikoti. In Martvili you are going to visit Martvili Monastery, Dadiani Royal Palace in Salkhino and in the afternoon Gochkadili (Gachedili) canyon. In the evening dinner and overnight at a guesthouse or hotel.
Day 2
Breakfast in the morning and departure to Zugdidi, on the way you are going to visit Nokalakevi archaeological museum and in Zugdidi Historical and Architectural Museum (Palace), evening dinner and return to Tbilisi.
Martivli church-monastery complex is located on the highest hill in the convenient, the geographical and strategic location, from where you can see almost all of Imereti and Samegrelo. It is surrounded by walls. The main temple is dedicated to the Virgin Mary. In the remains of the temple are preserved the icons of the 14th, 16th, and 17th-centuries. George Chkondideli Mtsignobartukhutsesi worked here, under whose ideas and points of views was brought up the greatest Georgian King David the Builder. There is a small cell, where, according to telling, George Chkondideli taught David the Builder. In the 19th century Martivli monastery became the burial place of the chiefs of Samegrelo. Here, the leaders of Samegrelo and members of their families are buried. 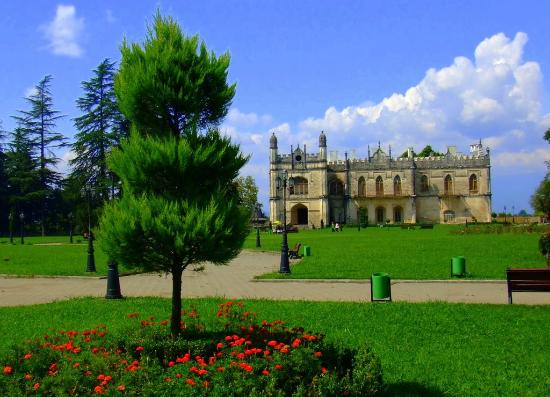 Dadiani Royal Palace in Salkhino – here the members of the royal family used to arrive in order to have a good time and leisure. The mentioned palace has a huge yard, beautiful alley of willow, the little church is standing in the middle of the courtyard and in the palace is a wonderful atmosphere with its garden and rare and beautiful plants in it. On the ground floor of the palace was located the cellar with a huge pitchers of local wine such as Ojaleshi which is a rare species. With oak columns, fireplace decorated with beautiful ornaments and richly decorated palace is completely corresponding its name - "Salkhino." The palace was rebuilt a few years ago and now is the residence of the Georgian Patriarchate.

Gachkadili (Gachedili) Canyon – it is possible to visit the canyon on a boat. As deeper you go you can see the wonderful waterfalls and caves. Here is one of the highest waterfalls which of Georgia, and it is easy to reach, it is also possible to pull down the waterfall with ropes. The canyon is one of the rare places in the world where prehistoric animal remains are preserved in the presented quantity, besides there is very interesting forests, river water is turquoise color, very clean, and during every season it is too cold, there are plenty of fish thus it is very interesting for sportive fishing. Canyon and the Valley are considered as reserved.

The earliest archaeological layers and discovered artifacts dated by BC.VIII-VII centuries, in Nokalakevi include: ceramic sculptures of the Hellenistic period (BC III-I centuries) and pitcher burial places of the tomb of a rich burial goods: gold, silver, bronze items. Nokalakevi is the mythic city, where the Argonauts stole the Golden Fleece. It should be noted that the ancient Georgian coin - "Colchis Tetri" was cut here in the VI century BC. Later Nokalakevi was the capital of the western Georgian Kingdom Egrisi (Lazika) in the IV-VIII centuries. Archeological works are performed there together British archaeologists for over 10 years. In Nokalakari Museum in reserve funds preserves totally about 4 thousand exponents.

In Zugdidi historical and architectural significance museum there are exhibited and religious relicts of the world importance. For example there is Virgin Mary's robe which was brought in Georgia in year 1453, after the fall of the Byzantine Empire. There are kept several relicts such as Saint Marine’s arm, Saint Kvirike’s hand, Saint George’s thigh bone part, Saint Johan the Baptist bone part. Among the rare exhibits, the museum is special for keeping the bronze mask of Napoleon the First. Another important part is the library for the thousands of manuscripts, rare books and volumes which were taken from Napoleon Bonaparte’s private library; also armaments collection of more than 200 swords, pistols, guns, and other military items. Around the museum there is the forest – park (botanical garden) cultivated by the Royals of Samegrelo the Dadianis.